Plumbing in Edmonton: DIY Fails That Cause Sewer Gas to Poison the Home

Recently I did a job for a young couple that was totally wrong.  Apparently the homeowner liked to do their own plumbing work but did not like to read on how plumbing drains should be hooked up.  The kitchen sink and bathroom sinks were hooked up wrong.  Instead of using a p-trap the homeowner created an s-trap.  Since you can not buy an s-trap the only way to have one is to make one.

The only place an s-trap is allowed is in a toilet or urinal, or any fixture that has a self filling water valve.  The reason for this is because an s-trap is self siphoning.  If you fill a kitchen sink up, wash dishes, then drain the sink you will drain the trap as well.  The momentum of the water continues to use siphon attraction instead of just using gravity to drain the sink.   This continues until the sink and trap are empty.  Once the trap is empty you will find that now sewer gases can freely enter the house and can cause you and your family to become sick. 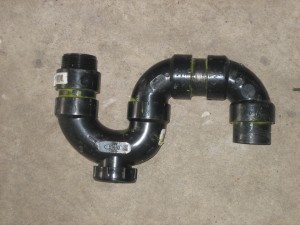 Normally an s-trap is created accidentally by too much slope or improper venting.  Code says that if you go more than 5 feet on a trap arm you need to install a vent.  Old code says that depending on the size of the pipe will dictate the distance before the vent needs to be installed.  In this particular case the homeowner should have had a vent prior to the 90 they used.  Which is quite strange as the original job must have been done properly.

As you can see in the picture this was made from a 90 degree elbow instead of just running straight to the outlet.

What I had to do to fix this was to use a p-trap and make the riser longer so the outlet of the pipe would line up properly with the pipe coming from the wall.  If you look where the trap meets the threaded fitting, called a trap adapter, there is only a small space between the two.  When I was done this job the space between the new p-trap and the trap adapter was about 6 inches.  Then everything lined up perfectly.  Also I prefer to use union traps instead of solid traps.  For the most part solid traps should only be used with showers, bathtubs, washing machines, floor drains or any other fixture that is not accessible.

Thanks to main financial partner: